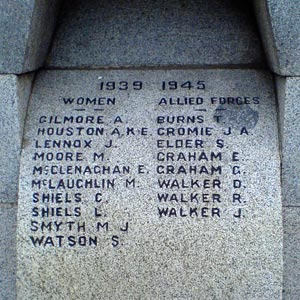 Elder, S is recorded on the War Memorial for servicemen and servicewomen between 1939 and 1945. I’m assuming Elder, S is male, listed as Allied Forces and survived the conflict. The memorial has a separate section for those who fell during the war. The large granite War Memorial for Kilrea, Co. Londonderry is found at the centre of the town on the middle of the crossroads.

Elder, S is my father Samuel Barr Elder will soon be celebrating his 90th birthday in February. Sam was in the Signal Corps for the Italian Campaign. Sam is married and has six (6) children ( 2 in Britain and 4 in Canada ) Sam lives with his wife in Toronto.